In the 10 years since the first tweet was sent, people with disabilities have loved Twitter, sometimes loathed it and then often loved it again. Here’s the story so far in 10 tweets.

Social media is a powerful platform for those whose voice isn’t often heard loud and clear. The advent of Twitter, with its bite-sized info and immediacy, made it incredibly easy for everyone to get their views out  without having to set up a website or acquire skills that often proved challenging for all but the really tech-savvy.

Text is the ultimate inclusive medium. It can have its colours or style altered to ease legibility, be readily enlarged without becoming pixelated for those with a vision impairment, or read out by screen-reading software for those who are blind or have severe dyslexia. Twitter, in its original plain-text form was fantastically inclusive.

3/10 Twitter.com interface proved awkward for accessibility, leading to alternatives like easychirp.com being hatched

Twitter.com was originally very challenging from an accessibility point of view – ironic really considering it had at its heart the simplest of content. Other sites like Easychirp.com filled the gap with an easy-to-use interface for reading and drafting tweets.

Hashtags like #a11y and #axs sprung up and suddenly Twitter became the place to follow breaking disability and assistive tech news across the globe – and it’s been the place ever since.

No social media platform is without its trolls. Trolls are people who may or may not think twice about saying horrible things to people’s faces, but who have no qualms about saying them virtually. People with disabilities aren’t spared – but we still love Twitter nonetheless.

At first Twitter opened its ‘firehose’ to all and sundry. The firehose is the full stream of tweets and associated data that 3rd-party developers could take advantage of in developing fully-functional Twitter clients (websites and apps) and many of them (particularly on iOS) were very accessible. This was especially handy considering that Twitter.com and the official Twitter apps on both Android and iOS weren’t very accessible at all. 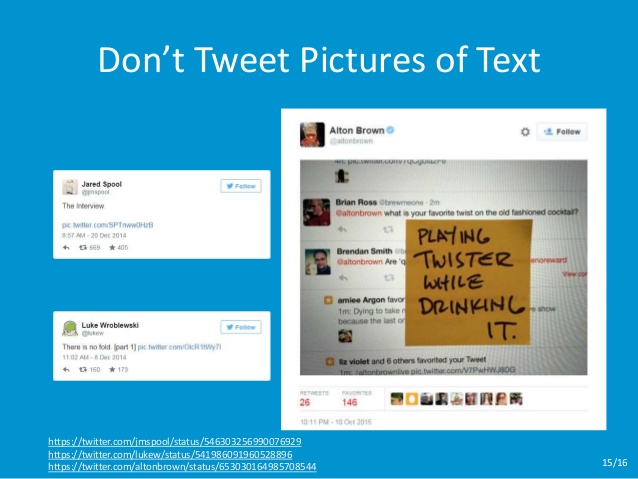 7/10 Now that Twitter users love sharing pics of food, cats and holidays, blind followers feel left out in the cold

It had to happen. The days of predominantly text-only tweets soon came to an end with the advent of mobile data plans with decent data allowances and soon every other tweet was an unlabelled image. For me as a blind person Twitter soon became just like the rest of the internet – partly fair and partly fowl (see what I did there?).

AbilityNet would love to see more Optical Character Recognistion (OCR) and object recognition on social media platforms, so we know what’s in photos – even more so now that we have quoted tweets, see Tweet 9/10 below.

8/10 But Twitter’s ‘openness’ flew away. Many devs had their wings clipped + far fewer 3rd-party apps. A peck in the eye for #a11y

Twitter turned off the firehose as they sought to establish a better business model for themselves. Developers began to fall away as their access to tweets became more limited and for a while the flight path for Twitter took a distinct nose-dive.

9/10 Quoted tweets + pics of text on Twitter pushed blind, visually impaired and dyslexic users out of the nest

Now that tweeters can retweet others’ tweets by including them as an image of text, it poses a problem. Many users with disabilities such as a vision impairment or dyslexia need to alter text to suit their needs. They’re missing the juicy worms of the original tweet and are left with the breadcrumbs…

Twitter.com is now mostly accessible, particularly for screenreaders. But the future is still uncertain for accessible social media. Facebook has upped its game and is even taking strides in auto-labelling your uploaded pics and recognising faces. Youtube isn’t doing an ostrich-impression when it comes to accessibility either – apart from the ever-irksome auto-playing of videos, which is totally confusing for screenreaders.

For Twitter to keep its beak ahead of the flock it’ll need to keep a sharp eye on #a11y and stop ruffling the feathers of some of its most avid fans.